Application for a Decree of Nullity

Create the document instantly yourself by entering the key details.

Self Service is not yet available for this document.

Create the document yourself with 30 mins help from a lawyer.

Lawyer Assisted is not yet available for this document.

We create a bespoke document based on
your instructions.

Please turn your device to landscape mode to begin creating your document.

Please turn your device to landscape mode to begin creating your document.

Thank you! Your message has been received!
Oops! Please check your details and try again.
No items found.

What is a decree of nullity?

It is an order which has the effect of saying that there is no legal marriage between the parties, even though a marriage ceremony may have taken place. (See Section 51 of the Family Law Act 1975 (Cth.) and Sections 23 and 23B of the Marriage Act 1961 (Cth.)).

What grounds constitute a decree of nullity?

The Court may declare a marriage invalid on any of the following grounds:

❌ At the time the parties were married, one of them was married to someone else;

❌ The parties are in a prohibited relationship;

❌ The parties did not comply with the laws in relation to the marriage in the place they were married;

❌ Either party was not of a legal age to marry; or

❌ Either of the parties did not give their real consent to the marriage because:

1️⃣ Consent was obtained by duress or fraud;

2️⃣ One party was mistaken as to the identity of who they were marrying or the nature of the ceremony; or

3️⃣ One party was mentally incapable of understanding the nature and the effect of the marriage ceremony.

The Court will NOT declare a marriage invalid on the following grounds:

➲ Non-consummation of the marriage;

➲ Never having lived together;

See Marriage Act 1961 (Cth.) and the Family Law Rules 2004 (Cth.) for more information on what grounds a party may apply for a decree of nullity.

If a decree of nullity is not applicable it will mean that a valid marriage was formed.

Therefore, if one or both of the parties want to end the marriage, they will need to make an Application for Divorce.

This application is not currently available for eFiling.

Test your knowledge and get a discount for this document: take the .

Enter the code WHen you pay full price to Purchase one of the following Self Service documents:

Re-Enter the code at checkout each time you buy the following documents to get a discount:

Positive: Professionalism, Quality, Responsiveness, Value. "Best of the best service! James is so kind and really likes to help. Very professional and knowledgeable too!"

Professional knowledgeable. "The lawyer is really trying to understand the situation and give me the best advice for every possible way to protect my rights. The lawyer also gives advice on things I didn't request initially but definitely need in the future."

Outstanding Service, second to none. "Overall the experience was outstanding. Their attention to detail was great, which is what you want from a law firm. They also went the extra mile by protecting the documents supplied against fraud so we could verify each piece of information."

"I highly recommend James if you require legal advice, especially when time is of the essence. I needed help with a complex matter relating to property purchase, and within an hour of contacting James, I was able to meet him and discuss the issues and have him explain my options with clear references to the applicable law. James continued to work on the matter afterwards and explain my situation and options by the end of the same day. I had not met a lawyer before who was as fast and ready to help as James. It was a great experience to work with him."

"James is an experienced lawyer who I had the pleasure of working with previously. I highly recommend James."

"James and the team at Blue Ocean have advised us on a number of matters relating to retail leasing and commercial property purchase over the past 12 months. We’ve found his advice extremely valuable throughout, and he has helped us avoid what could have been significant/expensive issues in the future by providing his input and expertise. He’s always quick to respond to any questions or queries and overall the fees are very reasonable. We will continue to use Blue Ocean in the future and can highly recommend to others."

"Blue Ocean Law Group went the extra mile to deliver by collaborating with a local New Zealand law firm to deliver the Questrade (Canada) VOI – Verification of Identity I needed."

FAQ About this document

What is a Free Legal Health Check and why is this the best place to start?

What is a Free Legal Health Check? ✅

Our Legal Health Check is a process that helps you identify + prioritise your individual + business (if relevant) legal needs.

How does it work?

‍You will be asked to provide information about your personal and/or business circumstances;

A customised (jargon-free) report is generated in plain english with actionable recommendations.

You can then consider the information in your own time, and when convenient, select the most appropriate self-service legal documents from our online 24/7 portal or reach out to our legal team to discuss your options in more detail.

‍What does it cover?

Why go through this process?

This is an amazing way to quickly + proactively identify legal risks + opportunities to get your legal affairs in order!

It is compelling value with pricing at less than $1 per day which entitles you to access heavily discounted [members only] prices.

You could save thousands $$$ on your legal bills!

It is compelling value with pricing at circa $3.50 per day [equivalent to the price of a cup of tea or coffee!] which entitles you to access heavily discounted [members only] prices.

You could save thousands $$$ on your personal + business legal spend!

More than 1000+ Australian Lawyers use Embedded Lawyer-Logic. How does it work?

Our intelligent online questionnaire adapts to your answers and only asks relevant questions.

Simply follow the guidance and enter the requested information about your matter.

The information is then sent to our back-end legal document generation engine, which follows a matrix of algorithms to make decisions about what should be in your legal document, just as an expert human lawyer would do.

The engine then draws from an enormous body of content to assemble a top-tier quality legal document that’s tailored to your situation + requirements.

The finished document is then emailed to you in PDF format, ready to print and sign.

Your answers to the online questionnaire and a copy of the finished document in both Word + PDF formats are automatically forwarded to our legal team.

If we notice anything out of-the-ordinary we will contact you to discuss.

If you are a subscribed member or opt for paid Lawyer-Assistance, we will use the allocated time to assist to clarify and resolve any questions you may have.

If your matter is complex, high risk or you have never been involved in legal matters before, we highly recommend you opt for our Full Service.

Our legal team will contact you and assist you throughout the entire process.

If you are a subscribed member the cost for the time spent by our legal team to assist you is heavily discounted.

When should I reach out to speak to your legal team?

Our [Self-Service] legal documents are designed to be completed "without the intervention of a lawyer".

This approach will be appropriate for the majority of routine legal matters, where you are experienced and have learnt what needs to be considered and have gained experience in using our 24/7 online document portal to generate your legal documents instantly.

Some routine matters maybe totally new to you (meaning that you will have questions and we recommend you select our [Lawyer-Assisted] service).

Other matters maybe unusually complex, or of such high-value or risk that involving our legal team is the prudent course to take.

For these matters we recommend you select our [Full Service] option.

Is the Legal Documents Portal Secure? Does it use encryption to protect my personal information?

It was once said:

It would take the combined processing power of every computer in the world thousands of years to crack 4096-bit encryption.

In a more general context (outside of encrypted secure website traffic/data) it has also been said:

Data with 4096-bit encryption (only protected by a password) could still be compromised within seconds.

Easy pass-phrase, written down password, re-used password... etc. basically, always be on the lookout for the weakest link.

Trust the technology, but never trust the weak link - the user!

What extras does an upgrade to Lawyer-Assisted Service include?

Your upgrade to our [Lawyer-Assisted] Service includes …

✅ Create your standardised Legal Document based on your instructions.

Plus [+] Where Appropriate (at no additional charge)

⚖️ Use of proprietary fonts to maximise fraud prevention;

⚖️ Use of our Law Firm Letterhead;

Built on Webflow by Will Morley. © Blue Ocean Law Group™.

Become a member and enjoy discounted prices on all documents. 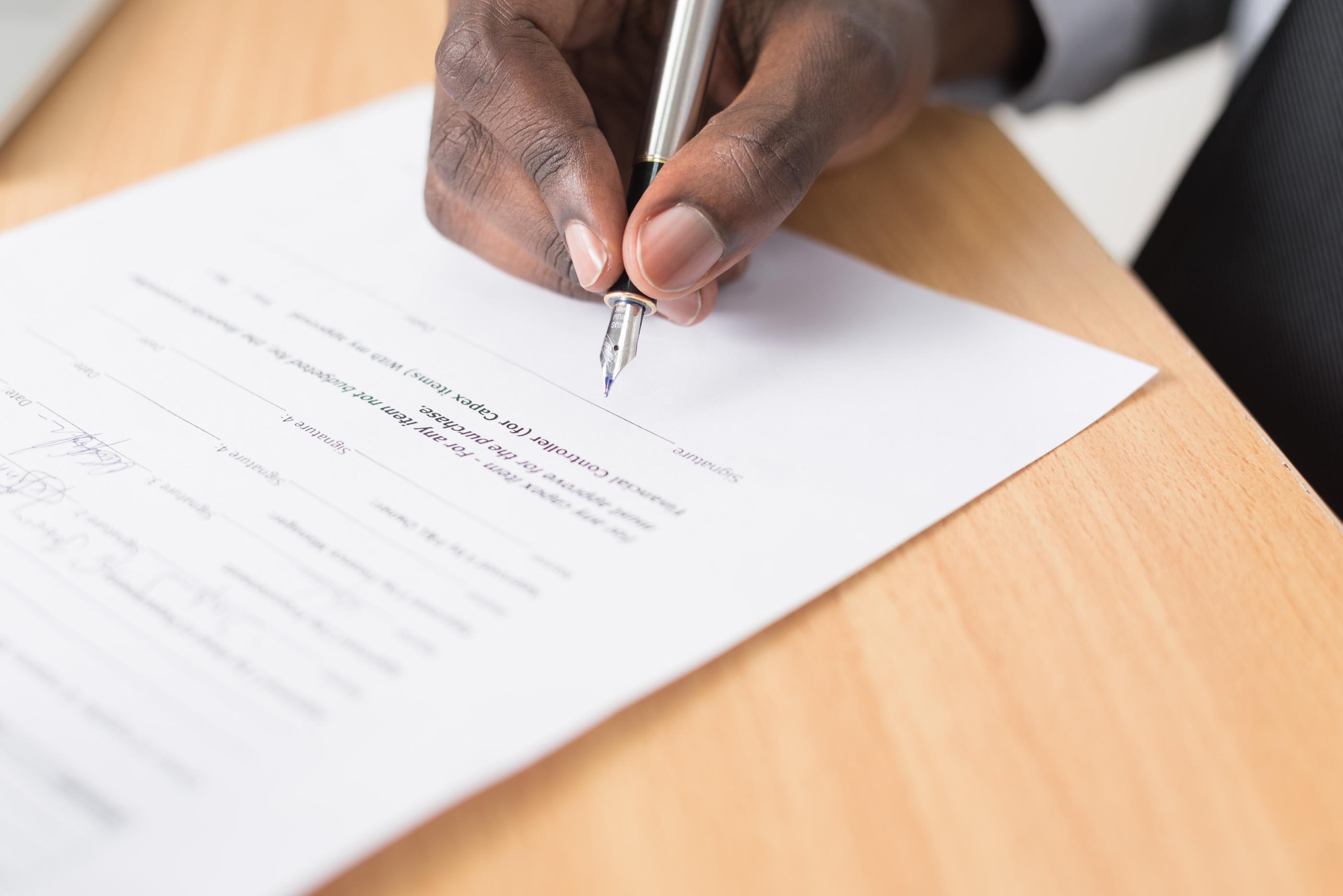