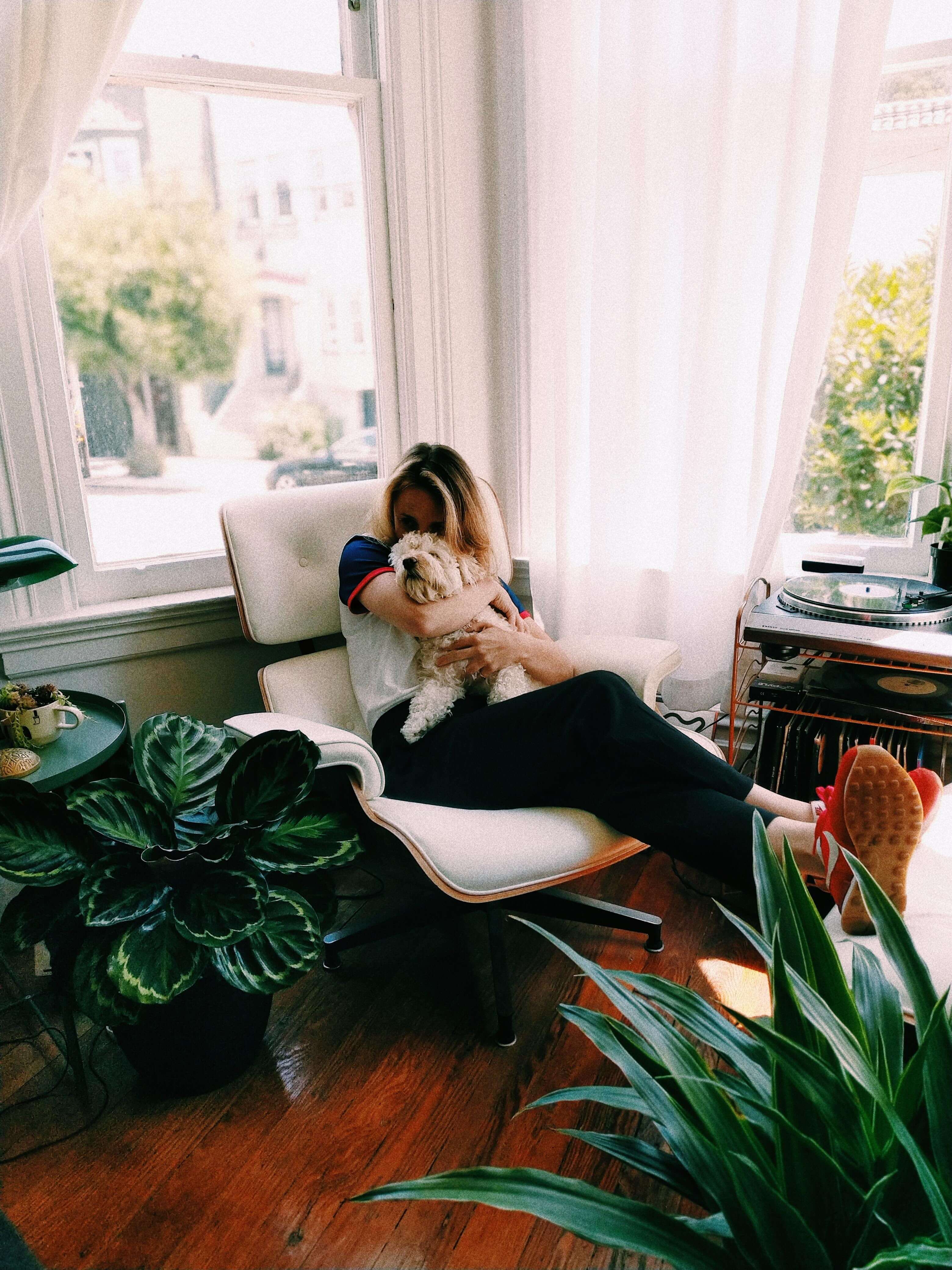 At what will hopefully be the end of a David v. Goliath battle, the NSW Court of Appeal has unanimously declared a Strata by-law banning all pets in the building as void because it was “oppressive”! This judgment, as well as proposed legislative amendments (supported by the first-ever online e-petition in NSW Parliament's history), may finally signal victory for pet owners!

“An owner or occupier of a Lot must not keep or permit any animal to be on a Lot or on the Common Property.”

While the decision of the NSW Court of Appeal was pending …

Adverse Cost Orders were made by the NCAT Appeal Panel

Some relevant extracts from the NSW Court of Appeal Judgment Headnote …

“An owner or occupier of a Lot must not keep or permit any animal to be on a Lot or on the Common Property.”

“The applicants, Johanna Cooper and Leo Cooper, own a lot in a freehold strata scheme constituted by a 43-storey apartment building in Darlinghurst, Sydney known as The Horizon.

By-law 14 of the strata scheme relevantly states that “an owner or occupier of a Lot must not keep or permit any animal to be on a Lot or on the Common Property”.

The applicants keep an animal (a miniature schnauzer) in their apartment in contravention of by-law 14.

Upon an issue being raised as to the ongoing contravention of the by-law, the applicants commenced proceedings in the NSW Civil and Administrative Tribunal (NCAT) seeking a declaration that the by-law was invalid. The applicants’ primary case was that the blanket ban on animals on a lot or common property contravened s 139(1) the Strata Schemes Management Act 2015 (NSW) and provided grounds for NCAT to declare by-law 14 invalid under s 150 of that Act.

Section 139(1) provides that “A by-law must not be harsh, unconscionable or oppressive”.”

While the decision of the NSW Court of Appeal was pending …

Adverse Cost Orders were made by the NCAT Appeal Panel

On 29 September 2020 the Coopers were dealing with the reality of NCAT Appeal Panel orders to pay their legal costs in these proceedings, in addition to paying a portion of the other sides substantial legal costs.

The Cost Orders represented a potential bill of more than six figures* in NCAT which is normally a "no costs" jurisdiction where parties typically represent themselves.

* anecdotally the "doggie in the window" was estimated to be more than a quarter of a million dollars.

Court litigation is where you expect to see adverse Costs Orders., not NCAT.

Therefore, the NCAT Appeal Panel had first to determine that these proceedings were unusual and complex triggering a rare exception.

The actual legal costs payable would have been subject to assessment by an Independent Costs Assessor on an Ordinary Basis.

Costs on an Ordinary Basis are often only about 60% to 75% of actual costs incurred.

After the NCAT Appeal Panel overturned the NCAT Tribunal members decision at first instance, the issue became a political one.

The petition was a direct result of the groundswell in support of (and heated opposition) from Strata committees determined to in their words "to retain their democratic rights to govern their buildings as they see fit".

Now that blanket pet ban by-laws have been declared oppressive; there is no specific need for this proposed legislative amendment.

The passing of the legislation may help to place the matter beyond doubt, and prevent the litigation from continuing to the High Court (which is still a remote possibility)!

The Cooper case has confirmed that the battle for owners to govern their own Strata as they see fit had already been lost through the enactment of s. 139 (1) of the Strata Schemes Management Act in 2015.

The provision enshrines an overarching limitation on all Strata by-laws in NSW:

By-law cannot be unjust "A by-law must not be harsh, unconscionable, or oppressive.

Note— Any such by-law may be invalidated by the Tribunal (see section 150)."

Due to what was at stake (the fate of Strata owners rights v. pet owners across NSW living in Strata buildings) the matter quickly escalated into a David v. Goliath battle.

On 12 October 2020 the NSW Court of Appeal vindicated the Coopers unanimously finding in their favour.

The adverse cost orders of just a week prior remain.

They should quickly become a distant memory.

I assume that the adverse Cost Orders will be appealed and appropriately set aside.

Some relevant extracts from the NSW Court of Appeal Judgment Headnote …

[4] “The power to make by-laws (s 136) is not unconstrained: [56]. The power may only be exercised for proper purposes: [57]. The function and purpose of by-laws must be derived from the language of s 136 and the statutory structure within which that section is found: [59]. A by-law which restricts the lawful use of each lot but on a basis which lacks a rational connection with the enjoyment of other lots and the common property, is beyond the power to make by-laws conferred by s 136: [61]. A by-law is to be for the “benefit of the lot owners” within the terms of s 9(2): [63].

[6] Perceived administrative convenience does not determine the validity of a by-law: [46] and [54]; [82]. (by Basten JA, Macfarlan JA and Fagan J agreeing)

[8] Applying the tests encompassed by the phrase “harsh, unconscionable or oppressive”, by-law 14.1 is “oppressive”: [90]-[91]. That is because it prohibits an ordinary incident of the ownership of real property, namely, keeping a pet animal, and provides no material benefit to other occupiers: [88].”

(1)   The Tribunal may, on application by a person entitled to vote on the amendment or repeal of a by-law or addition of a new by-law …, make one of the following orders—

(a)   an order that the amendment be revoked,

(b)   an order that the repealed by-law be revived,

(c)   an order that the additional by-law be repealed.

(2)   The Tribunal may make an order only if the Tribunal considers that, having regard to the interest of all owners of lots in a strata scheme in the use and enjoyment of their lots or the common property, the change to the by-laws should not have been made by the owners corporation.

(3)   An order under this section, when recorded under section 246, has effect as if its terms were a by-law (but subject to any relevant order made by a superior court).…

[63] This provision requires the Tribunal to have regard to “the interests of all owners of lots”, an approach which is consistent with the reasoning set out above as to the limits of the power to make a by-law. A by-law which restricts the rights of all owners as to the use and enjoyment of their lots in circumstances where the prohibited use would not interfere with the use and enjoyment of any other lot, is not a by-law which has regard to the interests of all lot holders; nor is it “for the benefit of the lot owners”, within the terms of s 9(2).

[77] “A potential lawful constraint arises from the subjection of the owners to the terms of the strata scheme by-laws made in accordance with s 136 of the Strata Schemes Management Act (see [10] above). This section permits by-laws to be made concerning the use or enjoyment of the lots and the scheme common property. By reason of s 139(1) (see [16] above), the by-laws must not however be “harsh, unconscionable or oppressive”.

[78] For a by-law to restrict a lot owner in the enjoyment or exercise of his or her rights incident to ownership would in my view be “harsh, unconscionable or oppressive” at least where the restriction could not on any rational view enhance or be needed to preserve the other lot owners’ enjoyment of their lots and the scheme common property.

[79] The by-law at issue in the present case (By-law 14) imposes a blanket prohibition (save in respect of assistance animals) on keeping any animal, or permitting it to be, on any lot or the common property. Its scope is broad enough to prevent lot owners using their lots in a way which could not, on any rational view, adversely affect other lot owners’ enjoyment of their lots or the common property. The keeping of goldfish in a secure aquarium was an obvious example given in the course of submissions in this Court. Other examples, such as the keeping of a small bird in a cage, could also be given.

[80] The keeping in units of many other types of animals could however of course adversely affect other lot holders’ enjoyment of their units, barking dogs being an obvious example. As Basten JA describes, there are statutory and model by-law provisions well capable of dealing with such issues (see [35]-[37] above).

[81] The Court’s role does not extend to reformulating an invalid by-law or making suggestions as to alternative forms of by-law that might be valid. It is sufficient that the subject by-law is readily capable of operating in a manner that is “harsh, unconscionable or oppressive”. That it may in some circumstances operate fairly cannot save it from invalidity.

[82] I agree with Basten JA (see [46]-[52] above) that the possible administrative convenience for the owners corporation or strata committee that might result from a blanket ban could not justify interference with the ordinary rights of lot owners by means of the subject by-law. As his Honour points out, the making of evaluative judgments in response to applications by lot owners, or concerning their behaviour, is a common incident of the management of strata schemes. Moreover, as his Honour also says, there is in any event no basis here for concluding that there would be a flood of applications for permission to keep animals if a different type of by-law (allowing the keeping of animals with approval) were to be adopted.”

[88] “By-law 14.1 is “oppressive” contrary to s 139(1) because it prohibits an aspect of the use of lots in the strata plan that is an ordinary incident of the ownership of real property, namely, keeping a pet animal, and the prohibition provides no material benefit to other occupiers of the building in their use or enjoyment of their own lots or of the common property.

In an apartment building such as that to which Strata Plan 58068 applies, an animal could be kept within a lot without creating the least interference with other lot owners.

The by-law is oppressive because it prohibits the keeping of animals across the board, without qualification or exception for animals that would create no hazard, nuisance or material annoyance to others.

By-law 14.1 thus interferes with lot holders’ use of their real property in a respect and to an extent that is unjustified by any legitimate concern of others in the building.”

Links to background media coverage of the story + the current on-line petition have been included in our Pet-friendly Buildings ➲ Smart List.

This article is intended for general interest and information only.

It is not legal advice and nor should it be relied upon or used as such.

Always consult a lawyer for specialist advice specific to your needs and circumstances.